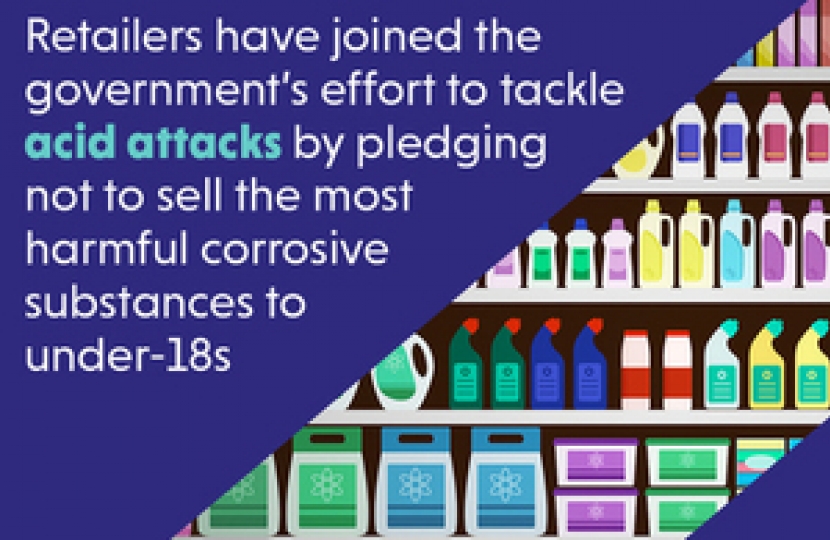 Today the government has published the details of the voluntary commitments, as well as a list of those retailers who have already signed.

Waitrose, B&Q, Morrisons, Wickes, Co-op, Screwfix and Tesco are among the major brands to sign the voluntary commitments on the responsible sale of corrosive substances. The British Independent Retailers Association will this month be encouraging all its members to sign up.

The publication comes as the University of Leicester launches a major research project, commissioned by the Home Office, into the motivations of offenders who carry and use acid in violent attacks.

"Acid attacks have a devastating impact on their victims, leaving both emotional and physical scars. I’m pleased that so many of the UK’s major retailers are joining our fight to combat this scourge and signalling they are committed to selling acids responsibly.

This is the next step of our acid attacks action plan that has already seen us consult on new laws to restrict young people’s access to acids.

It is also vital we gain an insight into the motivations and behaviours of those who carry out these unspeakable attacks, which is why we have commissioned a major piece of research that will help us understand more about this crime."

The voluntary commitments will see the retailers:

The voluntary agreement has been introduced now to ensure immediate action is taken by retailers on a voluntary basis, in advance of new legislation including the ban on sales to those under 18 being brought before Parliament and put into effect.