Talking broadband with Openreach and Government 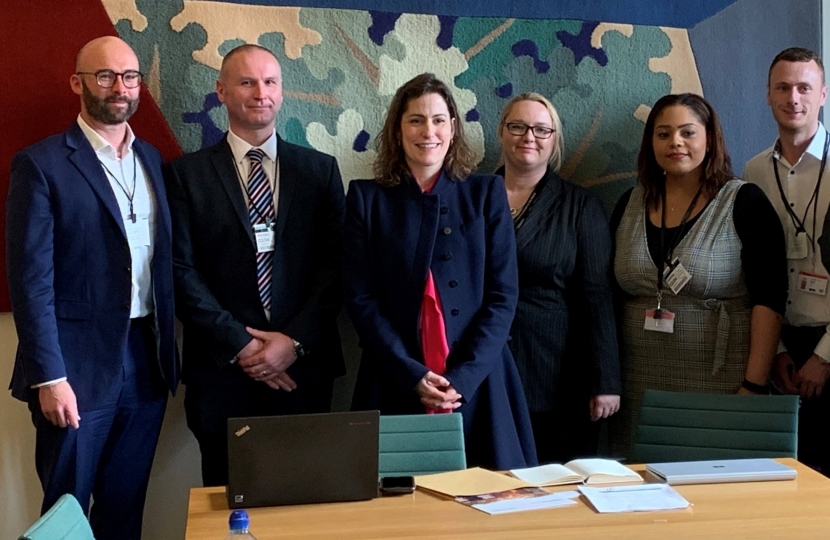 Victoria Atkins, Member of Parliament for Louth & Horncastle, chaired a summit on broadband in the Houses of Parliament to press major national stakeholders on improving provision.

Fighting for improved broadband provision has long been a major campaign for Victoria, and this summit is the latest push for better connectivity throughout the whole constituency.

Louth & Horncastle is the most rural constituency in Lincolnshire and has historically fallen well below the national average number of households able to access superfast broadband speeds. Over the last four years, significant steps have been taken to redress this balance and Victoria is committed to building on this further.

“I was pleased to chair a positive meeting with Openreach, DCMS and our County Council broadband delivery manager to discuss the current status of operational upgrades and the next stream of funding.”

“The major challenge in Louth & Horncastle continues to be the rurality of many of our villages, but I am encouraged that Openreach and DCMS are devising strategies to make remote areas more commercially viable and economical to upgrade.”

The Government is introducing a Universal Service Obligation (USO), giving everyone in the UK access to speeds of at least 10 Mbps by 2020, up to a reasonable cost threshold. This is the speed that Ofcom, the independent regulator, says is needed to meet the requirements of an average family.

Businesses and residents in the UK are also being urged to make use of the Government’s Gigabit Broadband Voucher Scheme which can provide businesses with up to £2,500 funding to contribute to a gigabit capable provision, and £500 for up to ten surrounding residential properties, per business connected. Vouchers can also be aggregated to meet the level of demand for connection. The scheme has already helped more than 8000 UK businesses and residents benefit from a gigabit capable connection.

The £67 million scheme was initially expected to run until March 2021, but high demand for vouchers means that funds are now expected to be committed a year earlier. Visit https://gigabitvoucher.culture.gov.uk to find out more.

In addition, the Better Broadband Voucher Scheme means businesses and residents currently receiving less than 2Mbps can apply for a voucher, up to the value of £350 per connection, to receive a basic broadband connection with speeds above 10Mps. The scheme is currently due to run until the end of 2019, so DCMS is urging residents/businesses to check whether they are eligible and apply for a voucher as soon as possible.

Lastly, in 2018 the  Future Telecoms Infrastructure Review outlined plans to ensure that the country’s broadband infrastructure is fit for the future.  Government has confirmed that a new "outside-in" approach will see most remote parts of the UK amongst the first to benefit. The Rural Gigabit Connectivity Programme is the first step in this process, with funding coming from the National Productivity Investment Fund (NPIF). The £200 million will trial models for local hubs in rural areas, starting with primary schools, alongside a voucher scheme for funding full fibre connectivity to nearby premises, providing full fibre connectivity to homes and businesses.

As a follow-up to the meeting, Victoria is encouraging residents in areas of poor provision to form Community Action Groups (CAGs), and she would very much like to hear from anyone interested in forming one.

Victoria explained, “I would like to hear from residents in areas where there is still a need for improvement, to hear about their experiences and to explore whether I can help them access funding streams with help from Lincolnshire County Council.”

If you are a resident in an area where broadband speeds are poor and know others in your area who would be interested in forming a community action group, please email Victoria@Victoriaatkins.org.uk

Good connectivity is essential in the 21st century. I have held Broadband Summits for local residents and businesses, championed our constituency in the House of Commons and challenged Ministers, councils and mobile operators to do better.