The Spring Statement: cutting taxes for families and businesses across Louth & Horncastle 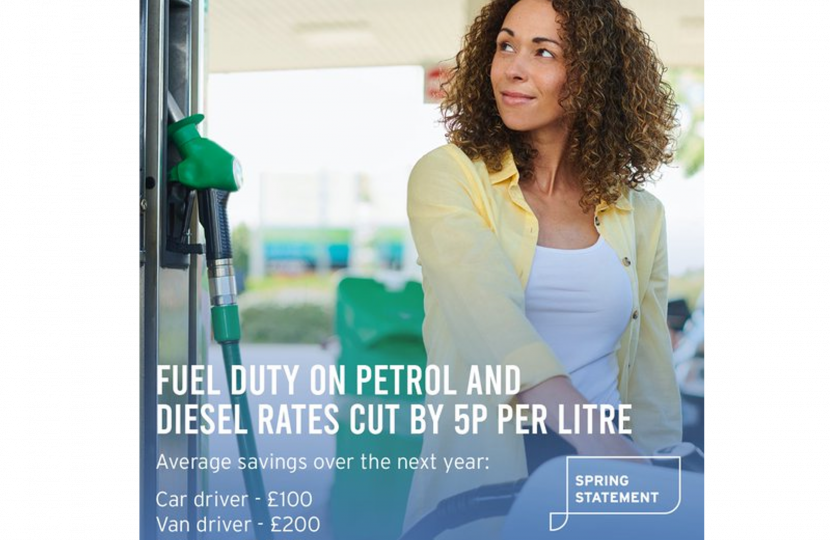 In the Spring Statement the Chancellor announced a plan that puts billions of pounds back into the pockets of hard-working people.

Thanks to our actions, the economy is recovering well, with record job vacancies and unemployment back at pre-crisis levels. Global supply chain issues following the pandemic, as well as Russia’s invasion of Ukraine, are driving up the cost of living for families across the UK.

Rising the National Insurance personal threshold from £9,500 to £12,570 from July, delivers the largest single personal tax cut in a decade. This is equivalent to a £6 billion tax cut for nearly 30 million workers and is worth over £330 a year for a typical employee. This simplification means that, from July, 70% of workers who pay NICs will pay less of it, even after accounting for the Health and Social Care Levy. Of those who benefit from the threshold increase, 2.2 million people will be taken out of paying NICs altogether.

To ensure more people can keep more of what they earn for years to come, the Chancellor also announced plans to cut the basic rate of income tax from 20p to 19p from 2024. The historic £5 billion tax cut for workers, pensioners and savers will be worth £175 on average for 30 million people and will be the first cut to the basic rate in 16 years.

There will also be an extra £500 million for the Household Support Fund, which doubles its total amount to £1 billion to support the most vulnerable families with their essentials over the coming months. Responding to the Federation of Small Businesses, we are supporting small businesses with a rise to the Employment Allowance to £5,000 - a tax cut for half a million small businesses worth up to £1,000 per business.

A reduction to VAT on energy saving materials such as solar panels, heating pumps and roof insulation from 5% to zero for five years will provide help to families to become more energy-efficient.

This cost of living support comes on top of the measures that the Government has already announced over the recent months to support families. This includes a £9 billion energy bill rebate package, worth up to £350 each for around 28 million households, an increase to the National Living Wage, worth £1,000 for full time workers, and a cut to the Universal Credit taper, worth £1,000 for two million families.

“I welcome the immediate slashing of fuel duty. For rural communities, where access to a car is often essential, this step will instantly help constituents with the cost of day-to-day tasks, such as the school run, getting to work and going to the shops.

The rise in the National Insurance threshold – which is the largest increase in a starting personal tax threshold in British history – will also support the hard-working families with the cost of living.

The Tax Plan announced delivers the biggest cut to personal taxes in over a quarter of a century – simplifying our system in the long-term whilst we deliver immediate relief for cost-of-living pressures.”

“It is only because this Conservative Government is taking the tough but responsible decisions that we can announce taxes are being cut and debt is falling.

“Today’s new Tax Plan will help families with the cost of living, create the conditions for private sector-led growth, and share the proceeds of growth fairly.

“We are delivering the biggest net cut to personal taxes in over a quarter of a century, and that is only possible because of the disciplined approach to public spending that only a Conservative government can provide.”

Local MP Sanctioned by Russia for Standing with Ukraine

Today, the Russian Ministry of Foreign Affairs has imposed sanctions on 287 members of the House of Commons, including the local MP for Louth & Horncastle, Victoria Atkins MP, in retaliation for UK measures over the Ukraine invasion.